The Swarm, the Warm and Avoiding Harm

Last night as I was reading “Travels in Siberia” by Ian Frazier before crawling under the covers, Mammoth Lakes was hit by a swarm of small earthquakes. People who don’t live in an area subject to earthquakes might say that any size earthquake is too big, the fact of the ground swaying and shaking under your feet, even a wee bit, is too much to stomach or even contemplate philosophically. But I’ve been living in California since 1981 and have gotten used to them, even after bouncing off the walls in the shower early one morning during the somewhat large Northridge quake in 1994. Granted, I’ve never been at the epicenter of one, but as a geologist friend of mine once commented, lots of little quakes (to ease the crustal tension in small bits of movement) are far better than one big’un.

So feeling all of those little jolts during the swarm at Mammoth actually was reassuring. Sort of like your significant other letting you know, gently, about each irritating habit as they are enacted, rather than storing them all up in the emotional cheeks until no more space remains and they come spurting out under pressure.

In the morning Mario and I got up early to clean the condo, pack up my velo-mobile, and get on the road for a full day planned to end at chez Mario in Torrance. First stop, Hilltop Hot Spring north of Crowley Lake.

heading up from the parking lot

the life of Mario 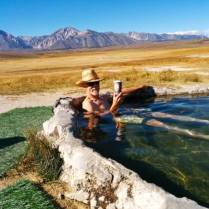 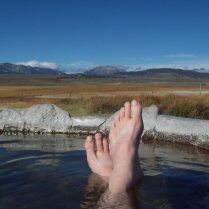 Mario and I parked my car behind the Inyo County Court House in the shade of a massive Deodar Pine tree, kitted up, used the rest rooms in the court house, and then started riding. Not much flat… we crossed over US395 onto West Market Street and the climbing started immediately. Gentle at first, but the climbing did not cease until we reached the top of the road at the Sequoia Pack Station. At the edge of town the road name changes to Onion Valley and the grade kicks up. You also lose anything to block the wind blasting up Owens Valley from the south, so were we being buffeted by a stiff side or frontal quartering wind, depending on the stretch of road.

heading west out of town 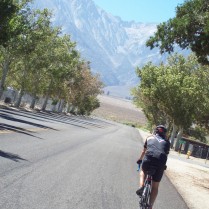 heading west out of town

campground next to a private enclave 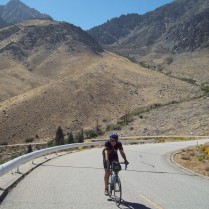 As we were fighting the wind and the pitch, I started to doubt the wisdom of making this ascent today. But here we were, nothing like the present and not too many opportunities to be in this neighborhood, so we continued our uphill slog. I started in a 39×24 gear combination and stayed with it until we hit the steep stuff above Upper Gray’s Meadow campground, then went to a 30×24 and stayed with that the rest of the way. Above Gray’s Meadow, around each turn I would look up the road and momentarily get intimidated by the vertical and lengthy perspective. But Mario and I would just keep spinning and putting the pavement behind us slowly and surely, no pushing hard into the red zone. Along some stretches between hairpin turns we would have a tailwind which I found was helpful only if I spun faster to pick up some speed, then the tailwind would add to the effort. 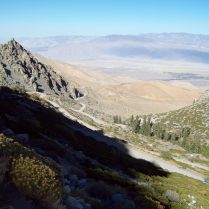 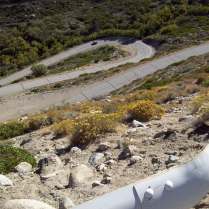 Up high on the climb the pines march in closer to the road and a rushing stream of no doubt frigid water splashes downhill, yet lifts ones spirit. Even more so when we came around an upper bend and saw vehicles parked at the pack station lot. 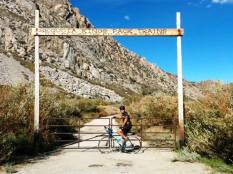 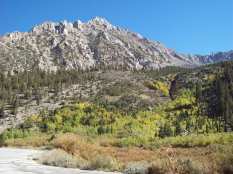 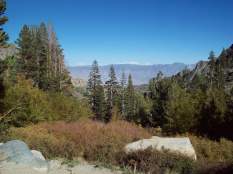 After a break at the lot we headed down very, very carefully. The pavement on the entire length of the road has thermally-induced cracks across the width at pretty regular intervals, ranging from finger thick to six inches wide, so while descending I would try to be light going over them to minimize blowout potential. The guard rails at the steepest dropoffs are pretty short, and elsewhere are non-existent, so I made an effort to stay away from the airy edges.

I suppose we ought to be congratulating ourselves on completing the erstwhile toughest climb in California, but I’m not so sure about that rating. Certainly it is a big effort, but even though I’m old and yawn all day because I can’t seem to suck in enough oxygen, I was never close to being overwhelmed on this climb. I’ve had much more trouble going up California 39 to Crystal Lake in the San Gabriel Mountains (and I was younger/stronger then), and Santa Rosa Creek Road inland from Cambria truly is an uphill nasty. I’m sure I could enumerate many more, but I’m happy to know that I should be able to climb Mont Ventoux without much trouble, since it is on my bucket list.

That’s it, we are done with our 8-day cycling and hot springing trip. Back to the retired grind…